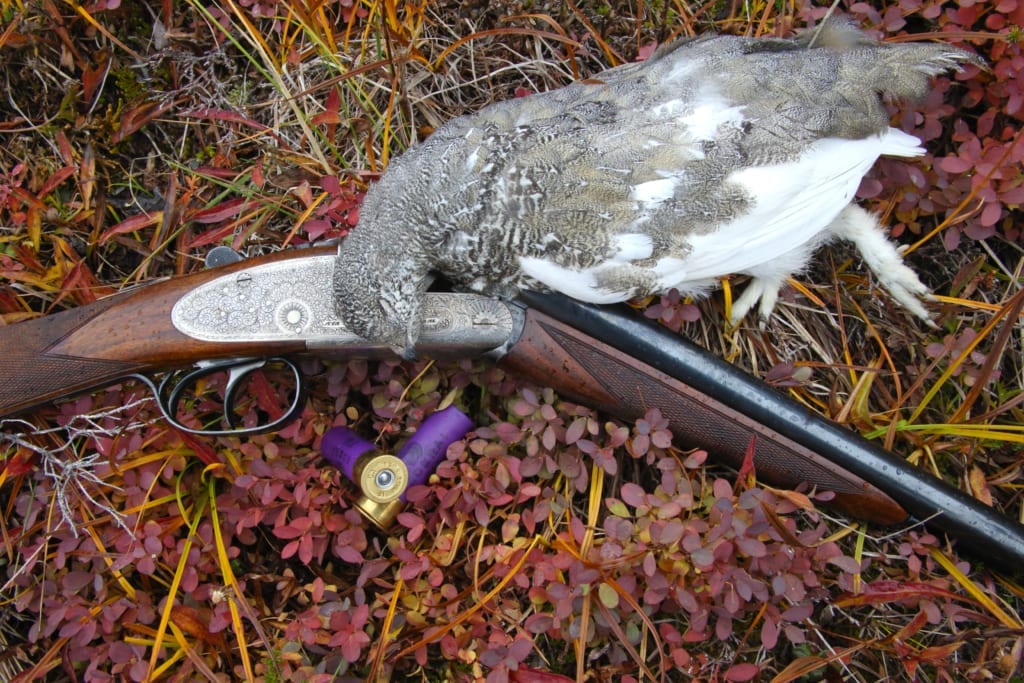 One option that definitely fills a lot of our fall guest’s itineraries is wing shooting. We have several different opportunities that are available.

A Full Day Kenai River Trip can be utilized to hunt ducks after September 1. We’re generally hunting puddle ducks, and early in the season they will be in their eclipse plumage so they’ll mostly just be brown and fun to shoot and eat. By the end of September mature adults will be demonstrating their normal colors, and in addition to Mallards, Greenwing Teal and Widgeon, we will shoot some Bufflehead and Goldeneye.

Spruce grouse hunting is available off of the road systems in the Kenai National Wildlife Refuge. Oftentimes, our guests will seek these on their own, especially if they bring their own dog and we will give them maps and strategies to succeed in collecting these birds. Head river guide Monte does a good job getting folks on these birds if they want more guidance than a freelance hunt. The hunting is better later in the year. This season opens on August 10.

Ptarmigan hunting is what we’re famous for here at All Alaska Outdoors Lodge. Each year I pilot hunters into three different geographic areas for Willow, Whitetail and Rock Ptarmigan. The Kenai Peninsula is one of the few places on the earth where you can get all three species in a single trip. This was accomplished by guests twice recently in previous years. The three species hunt generally requires that you be in really good physical condition, and dedicate at least a couple of days to the task, as weather frequently is cause for trip cancellation. And if you’re set on shooting some Ptarmigan, I recommend you book at least two trips and perhaps three, each one separated by at least a day to allow for weather systems to move through. The hunting can be quite strenuous. Particularly with regards to Rock and Whitetail Ptarmigan, there will be climbing and traveling over jagged rugged terrain that can be treacherous. These trips require better than average weather, because I’m also forced to tie my plane up, while we hunt in the mountain passes where the birds reside, and often high winds make mooring an issue.

Generally, we try not to combine groups of hunters that don’t travel together. We will share in the transportation in the Beaver, but I’ll try to have a guide for each group. Sometimes logistics makes this impossible and I do have to combine trips. Many hunters elect to bring their own dogs. You may keep them in your suite as long as they’re kenneled while inside.

In recent years, Willow Ptarmigan have been as prolific as I have seen for the over quarter century that I’ve been hunting them. I favor the early part of the season for Willow Ptarmigan as they are not bunched up in big groups at that point, and you get smaller flushes more spread out over the day. By the end of September they can be in large groups that may be difficult to find.

I am pretty adept at finding Whitetail Ptarmigan throughout the season. They live in small family groups and I know exactly where they live and I steward each family carefully and only take a couple of birds from each group in any given season.

Rock Ptarmigan are the most difficult to obtain. They can be anywhere in the rocks and move around considerably. They bunch up late in the season and oftentimes, the second half of September is best because high snow will push them down where they’re a little more accessible.